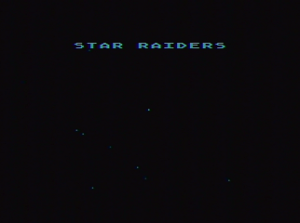 Star Raiders is a simple 3D space shooter. The majority of the game is in the 1st person pilot view. The player flies around in an asteroid field and shoots asteroids and enemy alien ships. That’s it. It’s a simple game and there is not much to it. 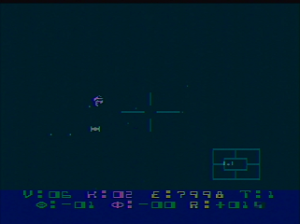 Yet it gives the illusion of depth. It seems to come in the rule of three’s. First off, there are three types of enemy ships, which boil down to easy, medium, and hard, but they are all unique. Second there are three distinct gameplay screens. There is a part where you fly through space with a 2D top down view. There is another part when you shoot enemies with a first person 3D view. Then there is a part where you choose the next warp jump on a map grid. Then you repeat the process. Changing between these screens and actions gave me the illusion of playing a much larger game than what it actually was when you take the time to dissect it. 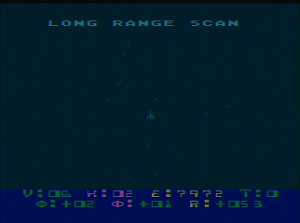 The controls also helped in the immersion for me. The controls were grouped together very nicely. This game combined the joystick and the keyboard very smoothly. You use the joystick to fly the ship and the keyboard for support functions. The keyboard controls especially impressed me. Similar operating controls are grouped together, yet each has its own section on the keyboard. Each section was spread out enough to give a sense of a “zone” for each type of job that you would find on a ship. For example, all of the controls that dealt with ship thruster speed where on the top of the keyboard and laid out in order from slow speed to fast speed, and then all of the controls that dealt with your view screen were located at the bottom left hand corner of the keyboard. The key layout wasn’t about mapping the keys around your hand so you had access to all the controls at any instant. Oddly it felt like a space ship control panel rather than a keyboard. I feel like a lot of time when into the thought of the layout of the controls, even though it might not be apparent at first. 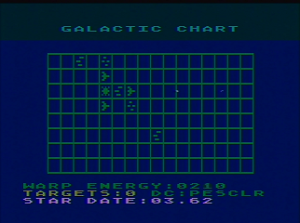